Sports have been plagued with prejudice and bias for as long as they have existed. The elite few that compete at the highest level have not always had their talents facilitated, and some inevitably have had barriers erected in front of them to make success less likely. Despite this, there are notable figures throughout recent history that have made indelible impressions: people who have sacrificed their careers and used their extended influence to take a stand. Some of these sportspeople have managed to avoid any fallout, whilst others have lost jobs and support, but ultimately they have all made decisions that will have positive ramifications, long after they have gone.

In terms of pioneers within sports, the Robinson brothers should be considered two trailblazers in tackling racial barriers. Jackie Robinson is one of the most storied players in baseball history, having broken the racial barrier after baseball’s major financers had enforced a white-only league 60 years before. When Jackie joined the Brooklyn Dodgers in 1947, he was met with abuse and racism typical of the time: nonetheless, he also brought with him a massive following of black fans from the “Negro Leagues”, as well as garnering the unexpected support of several fellow players at the time, at risk of ostracising themselves. Robinson’s resilience in the face of persecution was unyielding – he won Rookie of the Year, before becoming the MVP two years later, and winning the World Series in 1955. Jackie Robinson is now a legend of baseball, his iconic “42” jersey retired by every team in the MLB today, and the subject of many film and television shows. His work as an activist after his baseball career has had far greater implications, as he has used his platform to continue to break down barriers.

“I’m not concerned with your liking or disliking me … all I ask is that you respect me as a human being.” — Jackie Robinson

Jackie was not the only member of the Robinsons who should be lauded. Whilst far fewer people know of him, Mack Robinson was a sprinter who journeyed to Berlin for the 1936 Olympics, albeit in the sizeable shadow of the great Jesse Owens. Mack actually finished second in the 200m sprint that year (breaking the Olympic record), but behind Owens as he took home 4 gold medals. Mack and Owens showed the world – especially those living under the Nazi party – that superior race ideology was vile and wholly untrue, but this didn’t help either of them upon returning home to the USA. Both struggled to find jobs for a time, until Owens managed to get work as a director at Ford Motor Company. Mack had no such luck, consigned to sweeping the streets of an all-white neighbourhood in California, but began his own silent protest: he wore his Olympic jacket as he swept. As if to exemplify how blacks were treated, the police made him take it off.

The Olympics have often been a forum for both racial and political protest, offering an international stage for athletes to make a statement. At the 1968 Olympics in Mexico City, American athletes Tommie Smith and John Carlos took to the podium, having won gold and bronze respectively in the 200m final. As the anthem started, both athletes lifted black-gloved fists to the sky, a symbol not of black power, but a salute to human rights. These two men were shoeless with black socks to represent black poverty; Smith wore a black scarf to represent black pride, whilst Carlos wore a bead necklace in memory of those “lynched, or killed and that no-one said a prayer for”. Amongst all this, there was a glimmer of solidarity and support: the man with the silver medal, an Australian named Peter Norman, both empathised and supported his competitors, and was wearing an Olympic Project for Human Rights badge (as were Smith and Carlos) in his criticism of Australia’s former “White Australia Policy”. This simple act during the national anthem was immediately met with boos from the crowd and threats of expulsion from the International Olympics Committee (who had not made similar complaints against Nazi salutes in Berlin). Both Smith and Carlos again suffered exclusion by the public, struggling for work and recognition above being categorised for their skin colour, but they took a stand – even though they knew of the sacrifice it would require.

“If I win, I am American, not a black American. But if I did something bad, then they would say I am a Negro. We are black and we are proud of being black. Black America will understand what we did tonight.” – Tommie Smith

Taking a Knee to Take a Stand

In 1973, the eight members of the Brown University all-black cheerleading team did not stand during the national anthem, stating that the flag no longer represented them. They were denounced by the City Council, but Brown’s president defended their right to freedom of expression. Over 40 years later, NFL quarterback Colin Kaepernick took the same stance, sitting down for the national anthem prior to a preseason game, in protest of social injustices and police shootings of black individuals. He chose to kneel when the anthem was played for every game after, so as to show his support for US troops, whilst still maintaining his protest. Kaepernick began a movement: players and coaches began to conduct their own silent protests during the anthem, leading to an 8% decline in NFL viewership over the season, of which 30% stated the protests had caused. Kaepernick, however, still paid a price for his activism – he was the only quarterback who knelt during the season (worth noting, considering the majority were white), and was duly cut from his team, the San Francisco 49ers.

Colin Kaepernick has still not rejoined the league, citing “blackballing” because of his political statements, rather than his performance (this is a contentious topic, given some evidence that teams have offered Kaepernick contracts he has rejected). Just this week, one of the biggest names in the NFL, quarterback Drew Brees, stated that he “Will never agree with anybody disrespecting the flag”, a comment that highlights exactly why Kaepernick and people like him are protesting. As a consequence, other NFL players have spoken up against Brees, including current teammates, and some players have even been seen promoting activism around the USA (such as Deshaun Watson, a black quarterback, who joined George Floyd’s family for a peaceful protest). Whilst this is not the immediate impact Kaepernick will have hoped for, it shows the growing support that his actions have garnered within the community, and is hopefully a sign of what is to come. 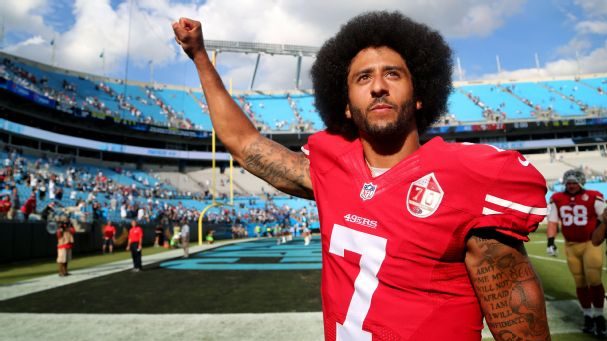 “I’m going to continue to stand with the people that are being oppressed.” – Colin Kaepernick

Each of these individuals’ actions have ended up impacting their own lives, often waiving their own opportunities in order to help further a cause they believe in. Without their sacrifices, there are others who would have continued to suffer in silence, but have now been given voices and platforms to push for real change. These are only a few examples of sports’ power, but provide a perfect study of why these sort of actions can have widespread ramifications, essential for a society to move forward.

Next story :The definitive guide to becoming an NBA fan

People reacted to this story.

Show comments Hide comments
Comments to: The Power of Defiance: Three Generations of Protest in Sports